Although Dutch occupation and settlement in Brazil all in all only play a minor role in world and colonial history, there are some interesting facts and very important relics of that time. Also drawn by high profit expectations of slave- based sugar industry, in 1630 the Dutch conquered a strip along the northeast coast, what’s today Pernambuco up to MaranhÃ£o, from Portugal. To insure the slave supply they also seized several Portuguese strongholds on the Guinea coast of Africa. 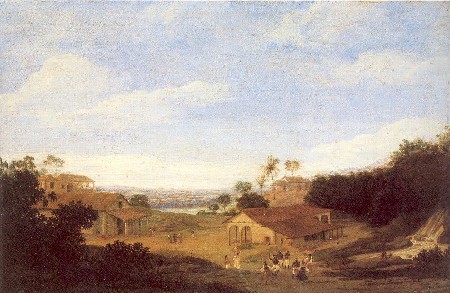 [1]
Appointed in 1636 by the Dutch West Indies Company, Johan Maurits van Nassau-Siegen (John Maurice Prince of Nassau-Siegen, 1604-1679) consoli- dated Dutch rule for various years by means of his governance and admini- stration. In comparison to most of colonial administrators he not only seized to exploit the country economically, but also supported science and arts in the colony. Under his subsidy Willem Piso (Dutch physician, 1611-1678) and Georg Markgraf (German naturalist, 1610-1644) published Historia Naturalis Brasiliae [2], the first multivolume work about Brazil’s geography, flora and fauna, history, botany, ethnography and medicine. 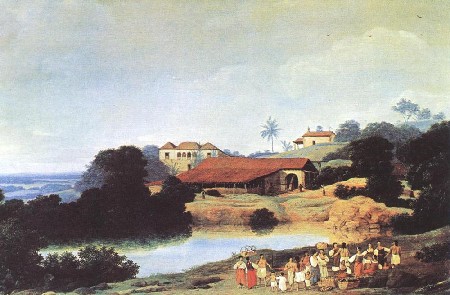 [3]
Van Nassau’s natural history and ethnographic collection was supplemented by paintings of Frans Post (1612-1680) and Albert Eckhout (1610-1665), Post being able to claim himself to be the first to paint a South-American land- scape. It is due to him that there are pictures of Brazil’s „social and economic reality“ in the 17th century as well as these conveyed first impressions of the tropical New World to the Europeans. Some of his paintings and sketches give us an impression of nature and architecture during this time, the functioning of the sugar industry, and the life of the natives.

„The view is unique in the artist’s oeuvre, and the figures are unusually prominent. For a Dutch painter, the plants, the people, the huts in the wood, the boats on the river, the iguana, and the palm trees on the horizon were exotic subjects, but Post observed them with the same directness that his contemporaries employed in painting their native environment.“ (Description [4] of Frans Post at the Metropolitan Museum of Art, New York City)

Albert Eckhout was paid less attention to at the beginning, but his paintings (24 in the Ethnography Department of the Nationalmuseet Copenha- gen, Denmark) represent an important store of documenta- tion of early colonial history. He turned his attention to the people in the colony whereas Post focused on architecture, landscape, and nature itself.
Maurits van Nassau and his companions returned to Europe in 1944, ten years before Dutch intervention in Brazil had already ended again. Frans Post in the following years profited from his sketches as models for several new paintings. Especially in the 1660s, when the Dutch mourned about their lost colony, he transfigured to an old romantic producing imaginary landscapes with colonial mansions, churches, and ruins surrounded by an abundance of exotic vegetations and animals. Later some of his paintings, after presented to Louis XIV of France in 1679, were used as the basis for the popular series „Les anciennes Indes“ (The Ancient Indies) at Gobelin’s Tapestry Manufactory [5]. 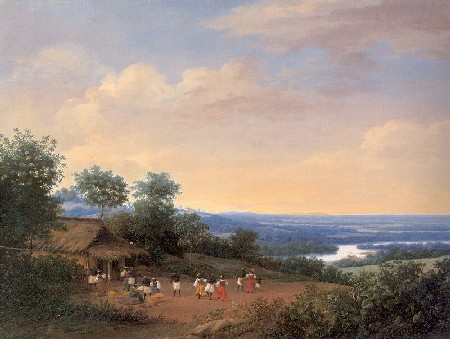 [6]
Until the 17th of September several of Post’s paintings and drawings are on exhibition in the Haus der Kunst [7] (House of Art) in Munich (in co-operation with the Museum of Anthropology, Munich [8]), one of the greatest retrospectives, since the artist died in 1680, under the title „Frans Post (1612-1680). Maler des Verlorenen Paradieses“ (Frans Post (…). Painter of the Lost Paradises). In addition to Post’s works of art, Rosilene Luduvico (1969-) presents drawings she did on initiative of the organizer following Frans Post’s footsteps in Northeast Brazil. The Morrinho-Project is another exhibition’s focus: kids and youngsters of a „favela“, a shantytown in Rio de Janeiro, created and built a miniature city populated by hundreds of little figures, who act according to the rules in a real favela (ANBA [9] on the project). For more information on opening hours and an exhibition catalog go to Haus der Kunst [10].