Meanwhile a sincere friend of mine has started his own blog called Traveling Asia [1]. His story is quite interesting. About three years ago he decided to leave everything behind, fed up with his work and his living in Boston, USA. He decided to reorganize his life in three phases. 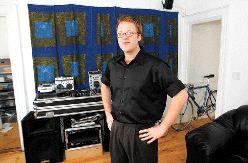 First, according to his motto „The things that are most important aren’t things at all„, he sold everything he had, left his job and began not to make further plans.
Then, secondly it was „not the destination, but the journey“ that counted and he left traveling the world. During this time it was when we once met in Madrid in 2004 (part of the formerly known „The Fellowship“). Since then he has travelled a long way through North America, Europe, Siberia and Asia, worked at an orphanage [2] in Nepal ending up in Japan [3] as an English teacher.
I am not sure if he has already stepped into phase 3 „The real voyage of discovery consists not in seeing new landscapes, but in having new eyes“ (quotes taken from his website at I Think Not [4]), which would signify to move to a foreign country, to become conversational in the local language, and to take no ladder jobs that might end him up back at Phase 1.

However, he has been publishing various stories of his travels [4], new impressions of his new life in Japan [3], his continuous work at the orphanage [2] in Nepal, as well as his new sidetrips throughout Asia. Please pay him a visit at his new blog Traveling Asia [1]…