Today, the 1st of May known as May Day [1] in general, a traditional holiday in many countries throughout the world and in „pre-Christian European pagan cultures“ which marks the beginning of summer, we celebrated the erection of our Maypole here in my hometown.

The maypole is a tall wooden pole decorated with several long coloured ribbons fastened to the top and to circular wreaths beneath, with greenery along the top part of the pole and badges and symbols of craftsmen and clubs characteristic of the town. The local and regional variances depend as may- poles are found throughout all the regions of Bavaria and throughout several European countries, especially the North. In Sweden for example the maypole is usually called the „midsommarstÃ¥ng“ because it appears at the Midsummer celebrations, but especially in the United Kingdom maypoles have a long tradition. Even then in the 16th century they served as communal symbols there, expressing rivalries between villages, who would steal one anothers‘ poles. The practice of stealing a maypole from the neighboring village seems to have been an important element of the tradition in Bavaria, too, especially popular in the 1970s like Kapfhammer states for various communities (1977: 172-175). In the early history of English colonization maypoles were also erected and celebrated in North America.

Whereas figured maypoles with its craftsmen signs like in our region or/and painted in blue and white date back to the 18th century, being finally esta- blished in the 19th during the Bavarian kingdom and the founding of political communities as symbolizing a new born Bavarian self-confidence, earlier poles must have been closer to what is known as the „traditional“ British or Scandinavian pole, usually shorter and plainer with ribbons tied at the top and hanging to the ground, although even these seem to be a relatively recent development. 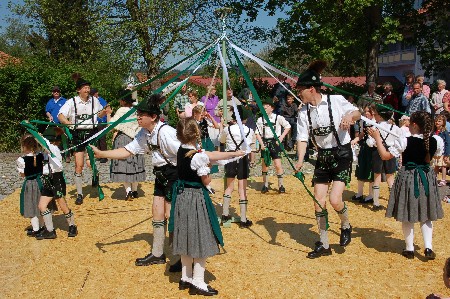 While the maypole is set up, people – here especially clubs trying to preserve traditional customs – perform dances, including weaving ribbons in and out a smaller imitation of the pole to create striking patterns (see the gallery [3]). The local marching band starts playing, naturally beer and sausages are served, and everybody has a good time. Nevertheless, „traditionally“ certain rules must be followed …