The idea of a distinctive and even exceptional character of American society and culture has long enjoyed persuasive power. It has lastingly affected not only the self-images of the United States, but also perceptions from without. Canada as well as further North American cultures and regions, too, sometimes embrace a topos resembling that of the exceptional. 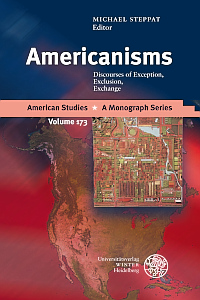 This volume employs diverse methodical approaches from the humanities together with the social and geographical sciences to explore the con- tents of the topos of Americanism, which have become decisive for the project of the modern. Transdisciplinary ex- change opens an opportunity to re- assess the effects and dynamic metamor- phoses of Americanism. The protean shapes of identification with or counter-identification against the United States, and at times Canada, are vital for the acceleration rate of cultural innovation. (Back Cover)

On a personal note:
Murschhauser, Marc, 2009: Africa in America: An Ethnological Perspective on Black Identity in the Americas. In: Steppat, Michael (Hg.): Americanisms. Discourses of Exception, Exclusion, and Exchange. Heidelberg. S. 227-242.