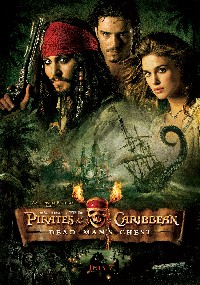 We all remember Disney’s Pirates of the Caribbean: The Curse of the Black Pearl [1] in 2003, I’m sure. Personally, I think, one of the funniest and best movies I have seen in the last years, which might be due to Johnny Depp acting as one of my favourites, the feeling of such easy entertainment with a brilliant soundtrack, and most of all because just a bit earlier I had started to study about pirates‘ history in the Caribbean, the Carib isles themselves, and their inhabitants. That the Disney version of Pirates of the Caribbean is just an imaginary story without almost any historical background didn’t bother me much … as mentioned: just brilliant easy entertainment. Now July the 27th the second part called Dead Man’s Chest [2] is about to launch (here in Germany). And I am really looking forward to watching it, maybe at the movies, where I actually haven’t been since 2003.

But being a careful blog reader for some time I haven’t failed to notice that there was a public debate going on about certain scenes produced for the movie regarding the people in the Lesser Antilles. Since February of 2005 the Caribbean Amerindian Centrelink (CAC) Review [3] has been posting about „Disney’s proposed plans for showing Island Caribs as blood thirsty man eaters“ (Maximilian Forte). Cannibalism! A classic case of cultural misunderstanding perpetuating negative ethnic stereotypes …

„It appears that the mythology of cannibalism was promoted by such early European explorers as Columbus as a means to portray the Indigenous people of the Caribbean as savages. This denigration of Native peoples led to the European justification to enslave them, take their lands, and create a racist system whereby people who were not of European origin were given a lower social status.“
Read the whole statement [4] by Pedro Ferbel-Azcarate.

The story: Disney filmed several scenes on Dominica and St. Vincent where they were very welcomed by the governments as they hoped for a promotion of tourism using and allowing the concept of showing local natives as cannibals, „the Caribs roasting live people on spits and holding captives to be eaten“ (Maximilian Forte). Exotism is here the slogan! Although many Dominican Caribs welcomed the financial infusion taking part in the production, resistance was offered and protests were lodged very soon not only by indigenous communities thoughout the Lesser Antilles, including Tainos, GarÃ­funa, and other Carib groups, but also in news media by the Los Angeles Times [5] and by Indian Country Today [6] in the United States. They all call for a boycott of Disney’s Pirates of the Caribbean and any Disney products. 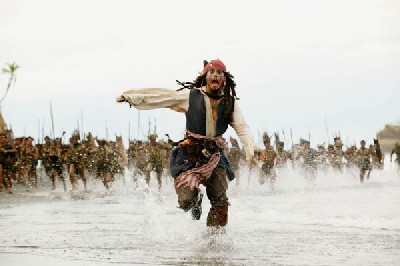 To be honest, although an afficionado of Maximilian Forte [7], currently Assistant Professor in Anthropology at Concordia University in Montreal, Canada , I don’t agree with him totally on his argumentation.
He states on April 23rd of 2005 [8]:

„While claiming that the movie, Pirates of the Caribbean 2, is simply ‚fiction, not history‘ and ‚entertainment‘, Disney has obviously chosen to reinforce a particular kind of fiction, that is, a historical fiction of the kind perpetrated by European invaders and slave traders of the colonial Caribbean. This is tantamount to saying that because the Nazis constructed a fictional view of Jews as a plague of rats in 1930s Germany, as shown in Nazi propaganda films, we are free to reproduce this fiction today arguing, ‚it’s just fiction‘.„

In his new text dated June 17th of 2006 [9] he draws the thread further placing cannibal images in a current context. In his opinion we confront „a time of renewed generalizing about the ’non-West‘ as the ‚uncivilized‘ world of inhumane acts of savage atrocities“ leading to anti-immigrant attitudes and deeming immigrants as potential terrorists.
Forte, deep down, certainly has a point here but sorry, a comparison like putting a Disney movie like Pirates of the Caribbean 2 into the same category as Nazi propaganda films, at least in my opinion, is inappropriate. What I think is much more valuable is his own field research experience:

„(…) generations of Carib descended school children in the Caribbean have been taught that their ancestors were savage cannibals. Shame over ancestry was inculcated as a matter of routine. (…) I have encountered individuals in their forties and fifties who told me very directly that the main reason they did not wish to self-identify as Caribs is that people in the wider world see Caribs as cannibals, as inhuman man eaters, and they found the stigma unbearable.„

To cut to the chase: I do understand the matter and I can re-enact the concern. As posted in a recent entry and comment on LittleLoca [10], playing with stereotypes can be very dangerous and often lead to racial assumptions. We cannot assume that everyone understands that someone is just playing with a certain clichÃ©. But in my opinion playing with stereotypes in a certain exaggerated and funny way, like probably done in Pirates of the Caribbean 2 (but I haven’t seen it yet), might bear the possibility not to throw stereotypes overboard but to show how inappropriate they actually are. This might be a naive point of view. I know that images and historic stereotypes are not banished from peoples minds; I know that a movie playing with these images will not be helpful in doing so; I know that kids who haven’t heared of cannibal stories so far very soon create their own visions and might believe what they see; but on the other hand I once stated in another discussion: „Please don’t underestimate the people!“ Maybe naive indeed. I think of myself. I watch the movie and I believe I can smile at what I see. I know that cannibalism is misunderstood. I know that colonial history is not presented upon facts. Maybe it’s me who really underestimates the people, because of having too much faith in us, in believing that we put these images in the right place because of the knowledge we have. As an anthropologist reading and writing about the matter I have myself wondering if I indeed had my thoughts too much on what I called „brilliant easy entertainment“ – having a good laugh rather than thinking about the sterotype’s impact. 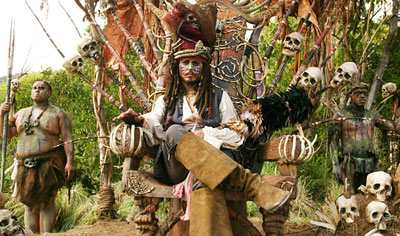 What matters really is the emic perspective. Caribs feel hurt and offended by the representation of their ancestors as cannibals. Should we as anthropologists step into action here? Be an Action Anthropologist? What about the other side of the coin? Christabelle Auguiste regarded „the filming of a potential blockbuster in her homeland as an opportunity to show off the island’s stunning natural attractions and to raise international consciousness about the Caribs and their traditions„, writes Carol J. Williams in the Los Angeles Times [5]. But what if „traditions“ are misrepresented, misinterpreted, and misunderstood?

Conclusion: My head is spinning. I am turning in a circle and feeling mixt and between. I get Forte’s point of interpreting the matter as a form of cultural imperialism, still I have faith in the audience to watch certain sequences with the right assessment.